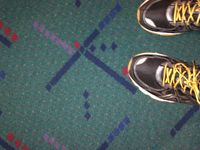 by hgmckinney |
New Arrival
in Check-In & Boarding
3 Loves
3 Loves
This is an interesting discussion.  I wonder how many people saw the episode of Mythbusters during one of the final two seasons that tried all the different boarding styles.  They tried several methods with assigned seats (back to front, windows then middles then aisles, free for all).  Each of the traditional carriers uses some form of these in the form of "group 1 board now", etc.  They just have the computer move people to the right group to make it back to front or whichever way they want it.  They also tried the "cattle call" as some have deemed it.  The amazing thing was that the boarding time saved on the method most like the SWA method was actually statistically significant.  That's important because saving 1 minute in a 25 minute process may just be noise in the process, but in this case they showed it was statistically significant.   There is a catch, however.  When interviewing the test subjects after the trials, they found that the "cattle call" was the "least satisfying" method to the passengers.  And this was also by a statistically significant amount.   Bottom line, if you have status on an airline you will get a better seat and usually not have to pay extra for it.  But if you are a recreational traveller, you will have to pay extra to get a better seat (or possibly be a credit card holder, or something else).   Best thing I can say is get out that old yellow legal pad (just like Ted Mosby on HIMYM) and do the pros and cons.  If you like the boarding process put it in the pro side for that airline and if not it goes in the con.  If you like paying for checked luggage, put that in the pro side (lol).   Above all, don't say "I will never fly this airline again because they lost my luggage once in 2003".  You will eventually need one of those airlines again someday.  SWA broke one of my skis (luckily on the way home) one time.  (I liked my skis, they should have broken my putter, that thing never works when I need it, but I digress).  We made an amicable settlement and moved on with our lives.  SWA has the most customer focused people in the airline business that I have come across.  The traditional carriers are just not anywhere near that level.  Alaska tries pretty hard, but still is a step or two behind SWA (several above UA, DAL, AA).   I have done extensive time and high level frequent flier miles on SWA, then Alaska, then Delta, now back to SWA over 15 years of constant travel.  It all depends on where and how you travel.  I LUV SWA, but when I had a job that made me fly to small towns in the middle of nowhere and international (before SWA went INTL) I went with Delta.  Now I am back and just don't see the need to change again.  Give an airline a couple chances before you give up on them.  Learn a little about their system and what makes them tick.  If it doesn't match your style and needs, then it doesn't and we move on down the road (sky).  GM vs Ford, Mercedes vs BMW, UPS vs Fedex, Amazon vs Mall.     Anyway, now that I have had my say, I am beginning to wonder if that whole putter thing is "operator error"?  No, that can't be it.   LUV -- HGM     ... View more

Re: 2 Reward Accounts for 2 People on 1 Flight

by hgmckinney |
New Arrival
in Rapid Rewards®
2 Loves
2 Loves
I found this by accident one time.  I needed 4 tickets for a simple trip up/down the west coast.  I was just fiddling around trying to see which of the 5 LA airports had the most convenient or cheapest points.  Then I somehow noticed that 1 was different than 4 on points.  So I tried 2 and then 3.  I was able to get 3 at the cheaper points level and then just booked a fourth at the higher level.  But if you put 4 in the sytem it went up for all of them.   So now whenever I look for multiple tickets for my parents or in-laws, etc, I try one person first, then check two.  If they are the same I just book it and move on downt he road.   Hopefully Southwest will still LUV me ... ... ... cuz I LUV them! ... View more

Re: 2 Reward Accounts for 2 People on 1 Flight

by hgmckinney |
New Arrival
in Rapid Rewards®
1 Love
1 Love
One way to check it is to look up the flights saying you need "1 adult" and see if the points are different if you put it on "2 adults".  If so, you can assume the system is about to hit a threshhold to move to the next price.  Might not be from WGA to ANY, but still a higher WGA.  So choose whichever account and quickly buy the lower points ticket with that account and then switch as the others described to the second account and buy the second.  Don't be surprised if the second one is 15,000 pts when you paid 8,700 for the first one.  This is exactly what is supposed to happen on these computer systems.   It is a yield management thing, not a glitch.  Facts of life in Airlines and Hotels.  They can't put the inventory back on the shelf and sell it tomorrow, once the seat goes out empty or room is unfilled, that's it, the potential revenue is lost.  This is why all the airlines used to overbook by multiple seats on every flight.  Kudos to SWA for ending that practice!  They still need to bump people occaisionally for cancellations, emergency employee travel (mechanics, flight crew needed elsewhere, etc), but not for overbooking any more.   ... View more

by hgmckinney |
New Arrival
in Rapid Rewards®
2 Loves
2 Loves
Remember you can always buy Early Bird for the reservation that doesn't have a-list.  It really isn't that much if you got the flight on points or companion pass already.  The only thing is that Early Bird is non-refundable, so if there is any chance you're going to cancel / change the booking, maybe wait until later to buy the EB.  Of course it appears that EB are in a first come - first serve basis by my experience, so you can end up with a very high A or even a low B even on an EB that you buy just a couple days before the flight rather than 3 months earlier when you bought the tickets.   Also, if A-List or A-List Preferred applies to the reservation, SWA's reservation system won't even offer you EB purchase, so you'll know you're good at that point.   Luv -- hgm ... View more

by hgmckinney |
New Arrival
in Rapid Rewards®
Keep in mind that many companies have these types of things, but they are quiet about them.  They are kinda like that "animal style" on the in-n-out burger menu.  You have to find out about it another way.  ... View more

by hgmckinney |
New Arrival
in Rapid Rewards®
franktravel is most likely correct.  It is an interesting way around the issue.  I have used my companion pass for many years and I think this would most likely work.  Again, just make sure when you book her ticket that you put her name and RR# in the system correctly and it should work out fine.   Also, you really have nothing to lose.  If you haven't noticed already, you can book it and then if it doesn't work, cancel it and get your points back.  Or call someone at SWA first to see if they can fix it, but my money is on it working just like franktravel said.   Good luck! ... View more

Flight Attendants are people too!

by hgmckinney |
New Arrival
in Inflight Experience
5 Loves
5 Loves
I have had a traveling style job now for 14 years.  I have travelled with SWA for the majority of them including the last 7 continuously.  Sometimes people wonder how those of us that travel can handle that type of life.  I will tell you it is not the easiest, but if it fits your personality, it really can be rewarding.  But over the last 3 years or so, I realized that flight attendants are people too!  Let me clarify, I always knew they were highly professional safety and customer service oriented ambassadors for the company.  But then I came to the reality that they have a travel job, just like I do.  Now on almost every flight, I try to find a quick moment to ask a flight attendant "are you getting home tonight"?  This seems to be one of the best questions I have found to ask because it leads to a quick discussion of how their day or week or trip is going.   The one thing that is amazing to me is that they seem to light up with a smile regardless of whether they ARE headed home or if they are laying over in an exciting city (MDW, LGA, BOS, ATL, AUS, MSY) or less exciting one (OKC, GEG, TUS, ELP) (Sorry, didn't mean to name names -- ok yes I did, but all in good fun).   I am really sad that I didn't make the connection earlier in my travel career.  Because now it really gets me into some great discussions with some kindred spirits.  People is what this airline is about and the people are wonderful!   Without a Heart -- It's just a Machine! ... View more